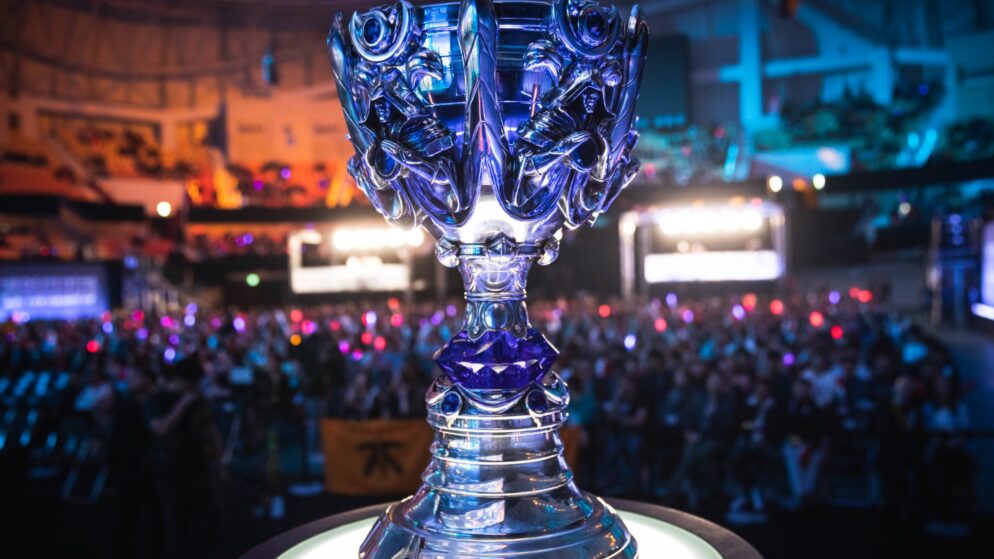 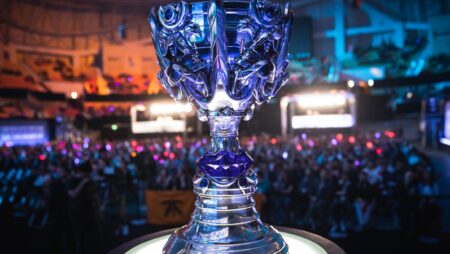 The 2021 League of Legends World Championship will take place from October 5 to November 6 in coolest city of Reykjavík, Iceland. It will feature 22 teams that will compete for a prize pool of $10 million.

The tournament will start from the Play-In stage. Ten teams divided into two top groups will play classic round-robin matches. Four winners will advance to the main stage of the championship, joining 12 representatives of the major leagues.

The group stage will be held in a double round-robin format. The eight teams with the most wins will continue in the playoffs.

The History of League of Legends World Championship

Since 2011, the tournament has undergone several changes over the decade. Prize funds, venues, competing teams, and rules are constantly being adjusted as the competition grows.

The ever-increasing demand for League of Legends game only helps to ensure that fact the event continues to evolve in the future. For now, let’s take a look at all the past seasons of the League of Legends World Championship.

The 1st World Championship, recognized as the Season 1 Championship, took place from June 18 to 21, 2011 in Jonkoping, Sweden. With an impressive total prize of $100,000, 8 teams from North America, Southeast Asia, and Europe participated in the competition. The event was watched live by over 1.6 million viewers and a peak figure of over 220,000 in the last few rounds. Team Fnatic won, facing Against All Authority at the end.

The competition featured some of today’s top League of Legends teams. There were top squads like Counter Logic Gaming and brand-new Team SoloMid, also popular esports organizations like Epik Gaming, Xan, and Gamed!de.

Having not suffered a single defeat in previous stages, Fnatic were the favorites to reach the end. The aAa team lost to Fnatic in the initial steps of the tournament, and the end was a huge step for the French organization. Fnatic hit a winning prize pool of solid $50,000 and SoloMid finished third.

After the success of the first season, Riot Games reported that $5 million would be paid out during the second season championship. Strategic Riot partners like the IGN Pro League received $2 million with an additional $2 million going towards Riot qualifiers for Season 2. Other funds will be donated to organizers who have hosted multiple independent LoL tournaments during the whole year.

The Season 2 Championship was held in LA in October 2012 and again became the final competition of the League of Legends season. Twelve teams participated in the competition, which is 4 more than in the first season. For the first time, Korean and Chinese teams took part in the competition.

At the time, the tournament offered a generous $2 million prize pool, the largest in all computer sports at the time. The Grand End took place on October 13th at the Southern California Institute in front of more than 10,000 happy fans.

More than nine million eSports fans from all over the world watched the competition, also 1.1 million during the grand end. Taipei Assassins of Taiwan won by defeating South Korean Azuba Frost.

The end of the 2013 world championship was watched by over 32 large numbers of people, which is significantly higher than at the end of 2012. Tickets for this end were sold out in just an hour.

Whereas SK Telecom and Royal Club crossed the finish line as winners and second, NaJin Black Sword and Fnatic took the third and fourth places. With the help of SKT’s victory over RYL, the rivalry between the 2 teams began for many years to come. It even become the reason for intense competition between the two main regions – Korea and the Republic of China.

SK Telecom T1 remains one of the best and classiest teams to this day. And the Faker still in the business up to date, continuing to be one of the top players in the world.

Riot Games decided to rebrand the 2014 competition, changing the title to League of Legends World Championship.

Sixteen qualifying teams have advanced to the tournament by winning the Mid-Season Invitational or became a local qualifier. A tournament was then played with sixteen teams before the remaining 8 teams took part in the playoff stage of the competition.

The whole competition was again dominated by classy Asian teams, with super strong Samsung Galaxy White winning its own 1st World LoL Championship. And again, the team on the second line is the Chinese royal club StarHorn. The quarter-finals were entirely dedicated to Korea and China, with Samsung Galaxy Blue and finest Oh My God taking third and fourth places consequently. The top 40,000 viewers attended the grand event, as well as about 280 million views on TV and online services like Twitch and Youtube.

For the first time since opening in 2011, the LoL Worlds schedule greatly returned to Europe in 2014. Big cities like London, Brussels, Paris, and Berlin were chosen as the owners for different stages of the competition.

Even though almost everyone expected a stern challenge from the 2011 winners, legendary Fnatic after their 18-0 record in the summer league also battling SKT T1 for 5 games at the Mid-Season Invitational, but the European team had to agree for third place. The best in China this year also fell short of expectations. The North American gamers of Team SoloMid also crossed the finish line.

SK Telecom T1 won the 2nd world title and beat its own South Korean rivals – KOO Tigers in the end. The final was estimated to have 36 million views.

The 2016 League of Legends World Championship was the 6th edition of the LoL Worlds series, which ran from September 29 to October 29 in the United States. Top Sixteen teams qualified for the competition again.

South Korean superteam SKT has captured the trophy again. With the help of “Faker” and “Bengi” in their own squad, their team won a stubborn victory over the Samsung Galaxy rivals in the end. Ultimately, emerging as winners 3–2, Faker was named the MVP of the competition, and the team also received impressive $2.6 million as prize money. Top-rated SKT T1 became the first LoL three-time world champion.

After the success of the 2016 global event, LoL Worlds 2017 was held in 4 different cities in the PRC, one of the most powerful regions in the competitive universe of LoL game. It was also a strategic decision given the significant growth of League of Legends in China, giving fans hope that their home teams can eventually win the main championship.

SK Telecom T1 counting on the 3rd consecutive title, and the South Koreans have already won the Mid-Season Invitational this year. LoL Worlds 2017 has pledged to be an explosive event as the domestic audience tries to enhance their dominance in the contest. Unfortunately for the Chinese, Koreans again beat the favorites with Samsung Galaxy and top-rated SK Telecom taking 1st and 2nd place consequently.

The 2018 World Championship was held only in Korea at various venues throughout the country. The game started in the capital of Korea Seoul. Then it moved to Busan for the group step and quarter-finals. The 1/4 finals were held at the Universiade gymnasium of the Gwangju Women’s Institute. The end ended in Incheon with 50,000 people viewers.

The teams competed for a prize of approximately $6,450,000. That was the largest prize pool in League of Legends entire history to date.

Constantly the strongest region, the top Korean teams took 1st and 2nd place in the 2017 World Championship. That was the reason why the 2018 League of Legends Worlds event in Korea. It also enabled the Korean teams that qualified well from the LCK to advance directly to the main group pitch, skipping the game step that some other regions were supposed to compete in.

Despite the rather strong play in the group step and to the shock of almost everyone, the Korean teams lost in the quarter-finals. This opened the way for North America or Europe to eventually make it to the finals (that was for the first time since the first season) and get a chance to win the championship.

The final moved to Paris, France. The prize fund was set at the US $2,250,000 (base level). Due to the sale of LoL Worlds passes and special skins of the world championship, the prize pool should have increased, but today we do not know the exact cash amount.

No changes have been made to the 2019 World Championship format. 24 teams from all over the world, as well. Taking into account that Invictus Gaming won the finest 2018 League of Legends WC, all the PRC qualifying teams went through the play-in stage.

With the best European and top Korean teams looking super strong, the 2019 World Championship was the most competitive to date. G2 Esports who won the Mid-Season Invitationals 2019 has made it to the end to face LPL Champions FunPlus.

All of Europe’s hope was on G2 to claim the trophy at home, but FunPlus ultimately won the end by beating the EU candidates 3-0.

The 2020 World Championship was thought of like an off-road show all over China. The end was to take place at the famous Pudong Stadium in Shanghai. But due to the growing global pandemic crisis, the event was reduced to only being held in Shanghai. All players had to go through a long period of quarantine and medical examinations before arriving in the Republic of China.

And also, the primary format with the participation of 24 teams had to be changed because the Vietnamese teams decided to cancel their participation. Changes were made to the stages of the game and the group step, most of all the promotion of all Korean teams directly into the group step.

The favorites before the tournament TOP Esports and JD Gaming did not achieve results at this event. Damwon Gaming became champions after hitting the entire competition and losing just three games in the entire 2021 World Championship.

The 11th LoL World Championship was planned in Shenzhen, China as the host city. Unfortunately, due to the ongoing severe epidemic, at the last moment, a change of venue was announced. Reykjavik, Iceland, was chosen as the host state. The 2021 World Championship will be held in the same location as the Mid-Season Invitational before this year.

And again, the primary format with the participation of 24 teams had to be changed because the Vietnamese top teams again canceled their participation. Now, the 3rd seeding of Europe, Rogue has been transferred straight to the group step.